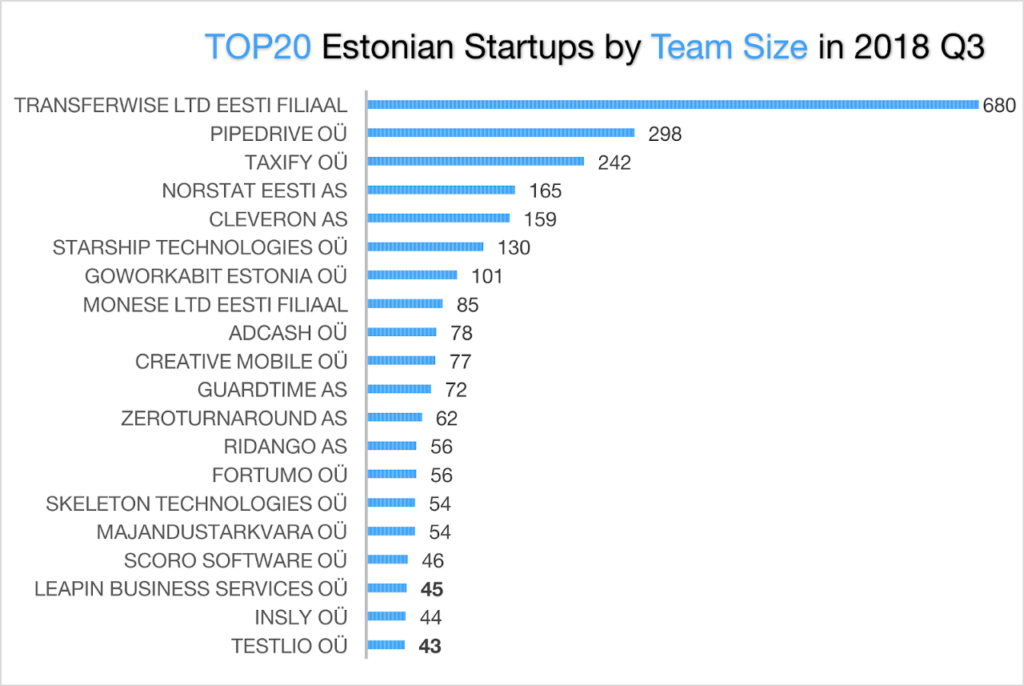 Estonian startup growth in the 3rd quarter of 2018

Recently, Q3 revenue, tax and employee statistics were published for all Estonian companies. The Superangel analysts selected 304 Estonian companies in the startup space and dived into the growth numbers. We found some of the usual suspects of fast growth, but also some not so obvious startup runners-up on a high speed growth trajectory. If you want to make your own rankings and lists, then go and play with numbers on Superangel’s Estonian startup statistics page: startuplist.superangel.io

Yes, we are fully aware of all the problems of TOPs, differences in stories behind similar numbers, and gaps in data making startups not fully comparable. We have listed the main issues in the “Problems with TOPs” section (see below). That said, we will now present you the TOP20s.

In order to know where TOP startups stand among the country’s growth drivers, we compared some numbers of the TOP startups to the TOP industrial manufacturing companies.

The biggest taxpayers among startups in the 3rd quarter

TOP5 biggest labor tax payers are the usual suspects: Transferwise, Pipedrive, Taxify, Starship Technologies and Cleveron. These 5 startups pay 60% of all taxes paid by the TOP20. This is much more concentrated compared to the manufacturing industry, where the TOP5 taxpayers pay 41% of the labor taxes of the TOP20.

There are only two newcomers among the TOP20 compared to the previous quarter: Scoro Software and GoWorkaBit Estonia. Scoro’s business management software-as-a-service solution combines project, time and team management with sales, billing, and professional services automation. GoWorkaBit has built a platform for helping retail, logistics and hospitality companies to find temporary workers. If they keep up with this growth speed, they will definitely start to get more publicity and become more known.

The most interesting tax numbers come from Adcash, who have a worldwide advertising and campaign management platform. While their labor taxes remained around 400 000€ in the 3rd quarter, their total taxes had a 5x spike and reached €2.9M. Most likely, Adcash has paid out €10M dividends in Q3, which have spiked tax payments. Yet, in their 2017 annual report there were no hints about plans to pay out dividends.

If we look at Year-on-Year (YoY) labor tax numbers growth volume and speed we have 13 startups whose quarterly taxes paid have grown at least 5%. Out of these there are four outliers. Two outliers have shown remarkable speed of tax payment growth on the yearly basis: Taxify (+308%) and Fiizy(+235%). The other two outliers are remarkable on tax payment volume growth. Transferwise’s labor tax burden has increased by 643 300€ and Pipedrive, a cloud-based sales software company, has increased the government’s tax budget by 383 000€.

There are 10 startups, who have shown growth numbers both in Quarter-to-Quarter (QoQ) and year-on-year (YoY) tax payments. The ultimate champion is Transferwise whose numbers do not fit on the chart below (quarterly tax payment growth +248 000€ and annual +643 300€).

Estonian startups have been accused of having a lot of press, but a much lower impact on the Estonian economy and nation’s wealth compared to industrial companies. Comparing labor taxes paid in the 3rd quarter of 2018 and 2017 we see that the TOP20 startups have within a year grown their quarterly contribution to the Estonian national budget by an additional €2.2M.

This is all about the growth of labor tax funds. Keeping the current baseline will remain heavily on the shoulders of manufacturing companies. The comparative share of taxes paid by the 304 selected startups will in 6 years reach 30% of the labor taxes paid by all industrial manufacturing companies. In Q3, the total numbers were 209MEUR for manufacturers and 15MEUR for the 304 startups. Joint effort is needed from both the industrial and startup communities to keep the economy ticking and growing.

Startups with the fastest sales machines in the 3rd quarter

According to the tax authorities data the TOP5 startups with the highest sales volume are our usual suspects: Cleveron, Taxify, Adcash, Fortumo and Pipedrive. Two newcomers into the TOP20 are Comodule and Bondora.

Comodule are positioning themselves as a global leader in bike and scooter connectivity, digitalization and fleet management for the light vehicles industry. According to Crunchbase, by 2016 they raised €525K in 3 rounds + more in 2 rounds, of which sums raised are not available. They have skyrocketed from position #92 (80 800€) to #18 with €1.167M. We will keep an keen eye on the startup and hope that this the start of continuous growth.

Bondora is an online platform for fixed-income investments in European personal loans, and has risen from #35 to #19 in sales TOP. Their last investment round was in 2015 and in five rounds they have accumulated funding of €7.2M.

Startup sales volume is important, but not nearly as important as growth speed and volume of sales. 17 startups in the sales TOP have increased their quarterly sales on a yearly basis. There a four clear outliers in this pack.

Volume wise Cleveron and Taxify dominate the list as they have added €12M and €10M respectively to their YoY quarterly sales. The other two outliers have had over 800% growth on their YoY quarterly sales: Comodule and Hashcoins. Hashcoins builds cryptographic hardware, creates blockchain technology-based solutions and provides remote hardware access services. They have increased quarterly sales from 500 000€ in 2017 to €6M in the 3rd quarter of 2018. Still it is a drop compared to Q1 and Q2, where they were making over €8M. Let’s see how they will do in coming quarters.

Although quarterly sales increase can be influenced by seasonality, it can also be an early indicator of a growth trajectory. There were 9 startups, who could show both quarter-on-quarter and year-on-year sales growth. Cleveron with its €2.5M quarterly sales increase compared to Q2 is a beast. It is just like they are printing money, so we took them off the chart (see below).

Realeyes measures how people feel as they watch video content online and their reports help video marketers to create better content. In May 2018, they raised €16.2M in a series-A round from Draper Esprit. They show up on the chart because they had really weak sales in Q2 and a €2.98M all-time-high in Q3. Let’s hope that they put their investor’s money to work and Q3 was just the first quarter in a long series of all-time-high sales.

Fiizy is a financing solution giving consumers approved loan offers at the point of sale from the majority of creditors. They have made headway in Spain and have now expanded their activity to Mexico, Peru, Argentina, Poland and the United States. They have increased their sales 11% quarter-on-quarter, 100% YoY and reached €2.7M quarterly sales in Q3.

Skeleton Technologies are positioning themselves as the global technology leader in ultracapacitor-based energy storage. Their total funding amount is €46,4M and most recently they got a €15M loan from the European Investment Bank (in Feb 2017). They have put investors’ money to good use and tripled their YoY sales from 573 000€ in 2017 and doubled quarterly sales to €1.9M. Good job! Let’s see  if they can keep it up and double their sales again in Q4.

We counted also 3 runner-ups, who based on their YoY and QoQ sales growth numbers could reach €1M in quarterly sales and be in TOP20 after a year. These are in alphabetic order: Fitlap, Funderbeam, and Majandustarkvara.

Fitlap has shown steady growth based on Estonian market. Can they break out? Funderbeam quarterly sales were first time in hundreds of thousands (€310K vs usual €40K). Can the keep that momentum? Majandustarkvara is an affiliate company of Erply team. Will it be able to keep up with salary surge trend and continue to find new engineers it needs for growth?

Transferwise is still far in the lead (680 people) and has twice as many employees as Pipedrive (298 people), who is next in the TOP20. They are followed by Taxify, Norstat, and Cleveron. The least known of these 5 is Norstat founded in 2007 by Kaspar Küünarpuu, which has grown into one of Europe’s leading providers of data collection services, helping clients to understand their markets and customers.

Newcomers to the TOP20 startups by team size are LeapIN and Testlio. LeapIN is powered by Estonian e-Residency and provides services for starting and remotely running a location independent company online, in Estonia/Europe. They raised €1.3M using equity crowdfunding in October 2017 and recently hired a serial entrepreneur, executive and investor, Allan Martinson as CEO.

Testlio provides a community of highly vetted testers and an end-to-end QA management platform. They raised $7.5M by 2016.

In the speed of team’s annual growth category Transferwise still dominates the whole startup scene. They have added 216 more people, that is more than #2 Taxify and #3 Cleveron have added together. Transferwise is off the chart…literally.

On the graph there are 2 more outliers by YoY team growth metrics. LeapIN has tripled their team within a year to 45. Monese has almost doubled their team and reached a headcount of 85. They have built an online banking platform that offers super quick current account opening for all EU residents. In September 2018 they raised $60M in Series B from Kinnevik AB. With such funding they can surely keep growing.

Out of the TOP20 we counted 9 startups, which have been able to grow headcount both quarterly and annually. Transferwise and Taxify quarterly hires are again off the chart (74 and 34). Out of the other 7 there are three startups we have not mentioned yet Guardtime, Ridango and Starship Technology.

There are several problems with making such lists. Here are the ones we consider most important.

Metrics. Early stage startups growth cannot be measured in revenue, but in attraction, learning speed, etc. Ash Mauyra has written a whole book on it “Scaling LEAN”. Growth in the number of people and increase in revenue are not the earliest leading indicators, but they definitely are indicators measuring momentum of already growing startups.

Seasonality. Some markets are very seasonal, hence revenue growth quarter to quarter does not make much sense. Seasonality is most common to consumer electronics and consumer products. Most Estonian startups are not active in these markets so seasonality should not be such an issue. There are only two quarterly revenue indicators out of 8 we measure. Hence seasonality should not have too much weight in filtering out the best of the best.

Corporate structure. Several successful startups have built up their corporate structure by splitting revenue and employees into different legal entities. Most often a foreign mother company has revenues in their books and most of the employees in the Estonian subsidiary. For this reason companies such as Transferwise will not make into the high ranks in our index. Until we have figured out a way to compensate it we just have to accept this anomaly in the numbers.

Advantage of smallness. Estonia is a small country and startups are also small. If you have a low baseline then adding 5 people might skyrocket you into the TOP of the list of highest growing employers. Our current approach is to select by volume the TOP20 startups in three categories and see who are the fastest growing companies among the biggest startups. This somewhat minimizes the advantage of smallness and low baseline.

iThere are no comments