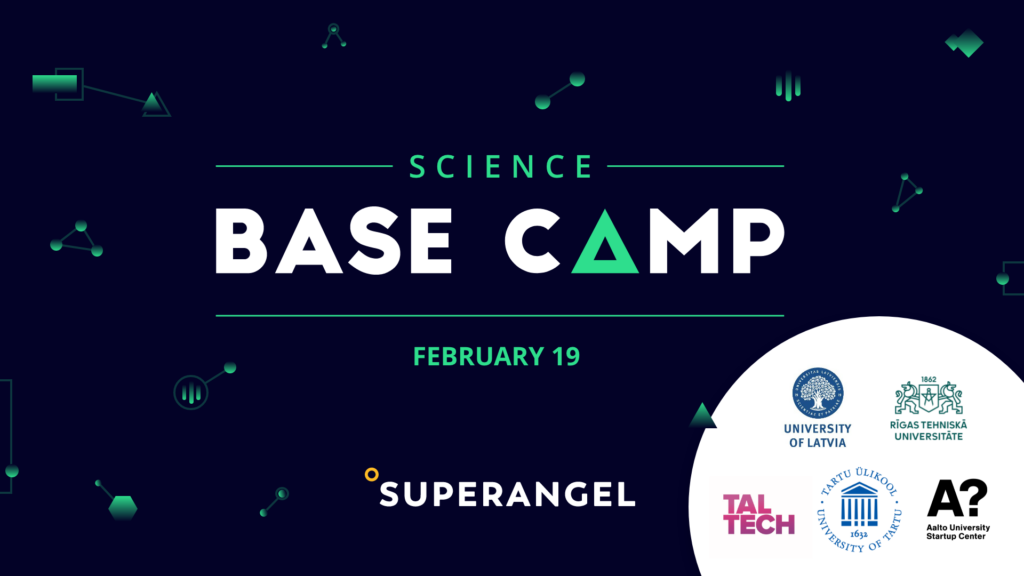 Venture capital funds join forces with Baltic and Nordic universities, including Aalto University, University of Tartu, TalTech, Riga Technical University and University of Latvia to launch a unique investment readiness day for deep tech teams called Science Base Camp. The aim of Science Base Camp is to build a bridge between investors and future technologies to help accelerate the commercialisation of science-based products.

The first Science Base Camp will take place on 19th February and welcomes teams and startups with science-based products, which have a sizable software component. The applications are open for teams that are led by students, PhD’s or faculty members, and are either in the idea phase or with an already existing product. Applications are open until 1st of February.

According to Superangel’s co-founder Veljo Otsason, the initiative is a dedicated step towards identifying the next wave of future technologies: ‘Nordic universities are known for their innovation and forward thinking. Our common goal is to offer support to science-based solutions that experience long development periods, and offer more meaningful feedback than ‘it’s too early for us’.

In addition to Superangel, Science Base Camp is joined by numerous other VCs, like Nordic deep-tech investment funds Nordic Ninja, Voima Ventures and Maki VC as well as Superhero and Practica Capital. Among the mentors are also several successful tech entrepreneurs and angel investors such as Bolt co-founder Martin Villig, ex-Skype executive Sten Tamkivi, and former Facebook’s director of partnerships Markku Mäkeläinen. At the end of the day, the investors will assess which teams they can continue supporting for the next eight weeks with advice and relevant networks.

‘Combining science with entrepreneurship could be the start of something revolutionary, especially when a scientist and an entrepreneur are the same person. But these two worlds are quite different. To excel in both of them, it’s wise to listen to the advice of experts from another field, and not try to get through it alone,’ commented Ahti Heinla, co-founder or Starship.

‘It can take up to 10 years before science-based solutions reach the market. To shorten lengthy development time and increase commercialisation potential, it is necessary to engage potential customers early on in the process,’ added Otsason. The uniqueness of Science Base Camp emerges from the impressive lineup of mentors consisting of entrepreneurs, investors and experts. Throughout the day, they will actively think along to help teams identify opportunities that could accelerate development time and increase market potential. In practice, meaningful feedback has helped teams save years of development time and significantly raise customers’ readiness to buy the solution. Participants can also use the opportunity to learn from teams from other universities who might be a step ahead in certain areas, and network with an international board of experts and mentors.

According to Kristians Karlsons from Riga Technical University it’s important for RTU to be a part of the Science Base Camp initiative, as it provides a platform for taking the critical next steps towards commercialization for science-based ideas and projects. “In the near future, the Science Base Camp can prove to become a significant platform that brings together teams and their research from several universities, thus allowing for cross-university experience-sharing and collaboration when it comes to commercialization.“

Sven Illing, the Vice-Rector for Entrepreneurship at TalTech says Science Base Camp supports TalTech’s goal of taking science to wider society through spin-off companies. “Estonia has grown into an excellent platform for the growing software-based startups. I’m hopeful that we’re taking the next step with our ecosystem, and mentors and investors will emerge who are capable of supporting science-based technology startups.” He added that TalTech is open for partnership with Estonian and foreign investors.

Science Base Camp will bring together 12 ambitious teams who’d like to get feedback from investors and accelerate the commercialisation process. This is the first one of a kind initiative in the Baltics and Nordics with a plan to involve more universities and investors in the future.